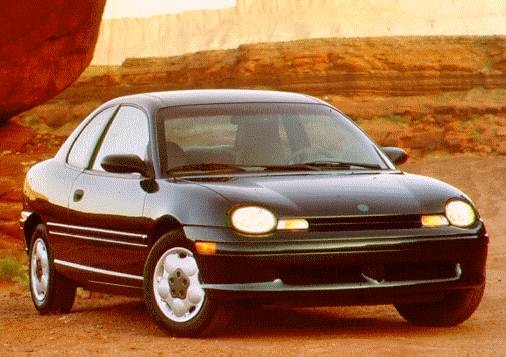 Dodge and Plymouth Neons are everywhere on used car lots, and usually offered for a low price. However, despite the "bargain" that they seem to be, potential buyers beware! The 1996 Neon is nothing short of a nightmare on wheels.

What is that certain indefinable something that makes a car desirable? Is it a cool, stylish body design? An interior that looks respectable and professional? Maybe a powerful, beastly engine? Whatever that something is, one thing is for sure, the Plymouth Neon doesn't have it. A "Plymouth" Neon, you may ask? Of course, during the run of the traditional neon, it was manufactured by Dodge, Plymouth and Chrysler, all roughly producing the same car, the only difference being in what manufacturer took credit in producing the thing.

Of course, despite the warnings that may have come from concerned friends and family, the Neon certainly does look like a formidable choice on the used car lot. The usually appear shiny, compact, a little sporty, an interior with a little flair, and a very good price tag. However, no matter how attractive or how good of a deal the Neon may seem, it is a horrible choice, and much better cars can be found with only a little more money. What exactly makes the Neon so horrible? The list is a long one.

Perhaps the best place to start though, is the outside. The Plymouth Neon seems to be one of the only cars ever made that paint refuses to stay on. A quick look at almost any Neon on the road will reveal numerous places where the paint has simply flaked off, leaving an ugly, untreated metal rust behind. Couple that with the fact that car's body design is something like a poorly grown banana, and that the tiny, tiny headlights will fog over in a matter of days, even after replacing the entire assembly, and you have a car that is simply unforgiving and unattractive when it comes to exterior care.

While the inside of the Neon can actually boast towards being somewhat interesting, one look at the cheap plastic materials and easily breakable gauges, vents and other objects will have you rethinking your assumption that the car looks good inside. Be careful when trying to clean it as well, for most cleaning products will actually damage the cheap plastic and other materials used in the car's production. With a steering wheel that looks and feels like a toy, and a shift knob that is both uncomfortable and uncomfortable, the Neon isn't really that much more fun to be in than it is to look at.

However, the area where the car loses the most points by far is the way in which it runs. Potential Neon owners take notice, the car is simply not designed to run more than say eighty or ninety thousand miles. Beyond that, the transmission will fail, the head gasket on the engine will go, the exhaust will fall to pieces, and more than likely the suspension or axles will require work. On my particular model, the fuel injectors became so badly clogged that they would have all had to be completely replaced to get any amount of movement out of the engine.
Of course, this is speaking of the car in a used condition, but even new these were nothing to brag about. With a small, low output 2.0 liter engine, and an automatic that had perhaps the strangest shift point to ever appear on a car, the Neon was never a car that was meant to provide any satisfaction to the driver. The engines, even new, coupled with the low quality exhaust system meant an incredibly loud car, and since sound insulation (like everything else on the Neon) was produced to very low standards, it means that even during normal, city driving conditions, the noise can beard all throughout the interior.

This is saying nothing of the car's tendency to burn oil, and a habitual problem with developing leaks in the radiator and other hoses. Simply put, the nothing on the Plymouth Neon was ever built with any kind of pride or precision, and they have some of the worst service records of any production car.

Even though the price tag may be tempting, and the car may at first look good on the lot, get ready to experience a plethora of problems as soon as you drive the car around for a week or so. And also good luck trying to get rid of it on a trade in. Believe it or not, a good number of respectable car dealers will not accept a Neon as a trade in, the value of the car, and the headaches they can bring for dealers are simply too much for many to take on.

There are much more attractive used cars available than the Neon, cars that will last the driver a fairly long time and also provide years of fun and good experiences. In contrast, the Neon can provide none of that, it is a car that will provide a lot of headaches and bills for the driver, and maintenance on the things can actually be surprisingly expensive. Overall, it is just a poor quality car, and the 1996 model is one that should be avoided at all costs, buying one will only end in regret and hard feelings.