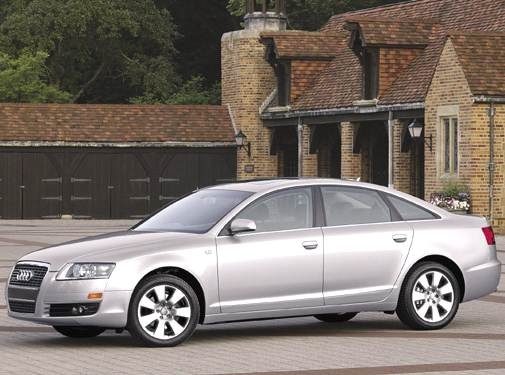 Anymore, it seems as though a car cannot simply be one thing. Indeed, an SUV cannot simply be an SUV, it must be a "crossover sport vehicle". Or, perhaps a luxury car must be a "sports oriented affordably priced luxury car". However, in the quest to be so many different things, many cars often fail to get even of those categories right. Thus, every now and then we happen to find a car which has one idea in mind, and manages to perfectly embody that idea. Recently, one of the best examples that can be found is definitely the Audi A6. A car which sets out to provide luxury to it's driver and passenger, and makes no claims towards anything else. Perhaps because of the singular nature of this promise, the Audi A6 delivers, and it may very well be one of the best cars currently on the market.

Even from the outside, the nature and quality of the A6 is easy to see. The new, redesigned grill on the front of the car speaks to the perfect balance that is Audi. The front grill is both aggressive but subtle at the same time, and it makes sure that the A6 looks anything but boring. While some may not like the sheer size of the grill, it definitely makes the next generation of Audi's stand out, and is likely to become a standard for the company over the next few years. However, even though the new grill has been found first in the 2006 models, there are also other exterior design ideas that deserve remark. Mainly, the smooth contour of the entire car, which is extended even to the rear bumper and roof line. Even though the A6 may not have the aggressive look of the A4, the refined style is much appreciated by those who are seeking a luxury car instead of a sports oriented executive vehicle.

The excellent styling and understated elegance only continues once one moves inside of the A6. The interior is laid out very nicely, and although the typically filled Audi center console is back, at no point are the various controls too difficult to understand or to use. However, they may take a little getting used to. The inside is filled with top quality materials, from the leather on the seats to the trim around the dashboard and controls, there is nothing about the interior of the A6 that doesn't remind one that the car is premium, and designed for luxury. This is further echoed by the roomy interior, and the great level of comfort given to the driver. The interior really is one of the best parts of the vehicle, and from it's overall quality, to it's level of comfort to the driver and passengers alike, deserves to be mentioned as one of the best features of the vehicle.

However, like all Audi's, perhaps the greatest joy lies in driving the car. Certainly the A6 is a luxury car, and it performs it's job perfectly and with precision. It takes only a single ride in the car to experience the smoothness of the drive, the way that the vehicle seems to glide effortlessly over any road, the ease and quick response of the throttle and steering wheel. No matter what task is given it, the Audi A6 performs it well and with dignity. Even though the car may be billed as a purely luxury car, driving the A6 goes above and beyond what is typically expected for a luxury car. Quite simply, this car is fun, which is something that is not often said about vehicle sin the luxury range, especially one with the A6's overall size. However, while the car is rather large, so is the engine, and this makes sure that the A6 never seems bogged down or sluggish, even when carrying a full load of people or luggage.

Still, the A6 does have it's flaws. Namely, the large size and width of the car can be a bit difficult to get used to. And because of the larger engine that is needed to move the car around, potential customers should not expect good gas mileage. However, these few design flaws are easily made up for by the great overall quality of the car, the fantastic inside and outside appearance, and the simply perfect way in which it drives. Even though the A6 may not be the cheapest vehicle on the lot, a single drive in it is all it takes to assure the driver that the car is worth every penny. The Audi A6 is truly one of the best cars available in it's class, and one that is sure to please a broad spectrum of customers, even if it's advertisements do not assign five or six labels to the car.